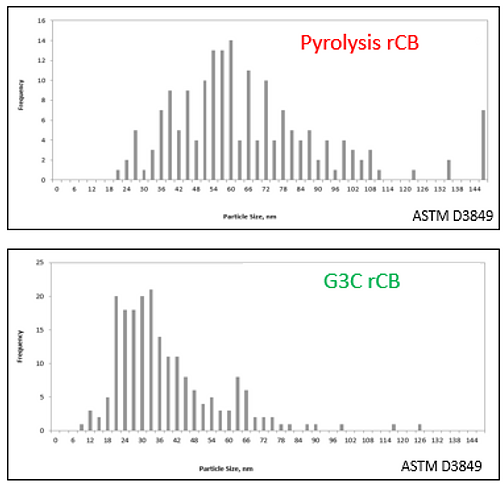 The G3C rCB mix PSD is more compact and shifted to the lower values along the particle size axis, comparing to the that of the pyrolysis rCB mix PSD. This enables G3C rCB to better perform in a number of tires, industrial rubber, plastic and specialty carbon black applications. In turn, it opening new market segments for G3C rCB, as well as increases its market value.

G3C is the first Generation 3 Scrap Tire Conversion Technology available in the world.

It is capable of producing rCB with high colloidal properties (i.e. surface and structure) values. It can potentially supply rCB for applications requiring high-grade and or specialty carbon black.

In comparison to all other existing tire conversion technologies, G3C stands out because it not only recovers carbon black built into tires, but it also upgrades it.

ASTM (www.astm.org) defines a carbon black grade by the size of its [elementary] particle, or more recently by the surface area. Surface area is tightly connected to a particle size, but the surface area testing is more accessible that of Particle Size Distribution (PSD) determination testing. G3C process reduces particle sizes, which means that it upgrades the rCB compared to the carbon black originally built in the tires.

Generation 1 or Generation 2 tire conversion technology recovers exactly the same grades of carbon black that were originally built into a tire. Since a tire is built from several different grades of carbon black, which are used to make tire carcass and tread components (as shown in Carbon Black Usage by Grade Diagram), after an entire scrap tire is shredded and the resulting chips are mixed, the conversion process feedstock material contain a mix of different carbon black grades. Carbon black recovered from such feedstock by a Generation 1 or Generation 2 tire conversion process contains carbon black all originally built in components as illustrated on an example of a hypothetical truck tire in a diagram below.

The entire pyrolysis rCB mix PSD (i.e. superimposition of the above PSD curves for pyrolysis rCB components) is shown in the diagram below.

The diagram above shows that pyrolysis rCB mix PSD is wide, i.e. 98% of all sizes are in the range between 15 nm and 95 nm, and the PSD curve has easily recognizable multiple maximums. The average and median sizes are somewhere between 50 nm and 70 nm. This means that on average pyrolysis rCB for the given feedstock can only achieve colloidal properties values of ASTM N7XX and 6XX grades.

G3C process upgrades each carbon black component in the mix. The diagram below illustrates the reduction of the particle sizes for a given feedstock by G3C process with selected parameters.

The diagram above shows that G3C rCB mix PSD width, i.e. 98% of all sizes are in the range between 8 nm and 65 nm. Although, this PSD curve has multiple maximums, they are not easily recognizable, as they are in case of the pyrolysis mix PSD. The average and median sizes are somewhere between 30 nm and 40 nm. This means that on average G3C rCB for the given feedstock and given G3C process parameters shall have colloidal properties values of ASTM N4XX grades (i.e. between typical for the industry N5XX and N3XX grades).

The actual tests (ASTM D3849), conducted on pyrolysis and G3C rCB mixes produced from the same truck scrap tire feedstock material, supports the theoretical diagrams above. The histograms resulted from the test are shown below.

The diagram above shows that PSD for each carbon black component is similar to the original component PSD (i.e. is also represented by a bell curve), but is narrower and is shifted left along the axis of particle size comparing to that of pyrolysis rCB.

The entire G3C rCB mix PSD (i.e. superimposition of the above PSD curves for G3C rCB components) is shown in the diagram below.